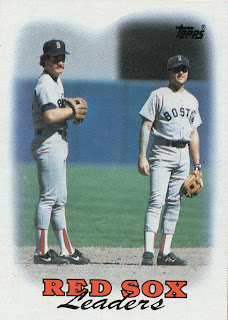 If you have a Wade Boggs player collection, does this card belong in it?

Long ago, card companies realized that stars drove their products. The more chances they had to put stars on cards, the better. Leader cards were a great way to do it. Not only did it allow them to fill an extra star card for each team, but it actually served a purpose. Sure, they could put Boggs in a “Hit Kings” or “Superstar” subset. But, that’s really just another card. But, to make a card listing the leaders at different categories for each team is actually useful.

The design for this card is interesting. Especially when contrasted with the 1988 base cards. Those cards I always liked because the team name floated over the picture, and was even obscured by some of the detail in the photo. The player name similarly wrapped itself around the photo without getting too much in the way. For the leader cards, Topps went in the complete opposite direction. They created the cloud look, that completely obscured the edges of the photo. I can’t quite decide if it works, or not. But, it’s definitely one way to go.

The photo is a nice way to grab a couple Red Sox in one shot. It’s not the world’s most exciting action photo. But, neither is it a corny posed shot. For some reason, it works for me. I’d try and stump Jere and ask him when the picture was taken, but I’ve learned my lesson.

But, is it a Boggs card?
Posted by Section 36 at 6:42 PM
Email ThisBlogThis!Share to TwitterShare to FacebookShare to Pinterest