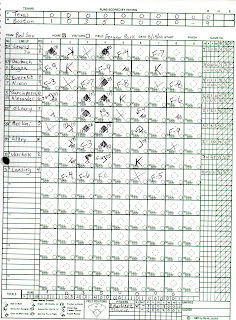 There is just so much good stuff going on with this scorecard. But, I’ll start with the pitcher’s box.

Anytime the name Pedro Martinez appears in that box, you know it’s a good game. How’d Pedro do on this day? I’d say he lived up to expectations. Seven innings pitched. Three hits. No Walks. Ten strikeouts. Not a bad day at the park. Three baserunnes in seven innings? Yeah, that’s a 0.43 WHIP. Some persepective? The next guy gave up two hits in only two innings. But, that’s just the beauty of watching Pedro pitch.

What about the offense? So often Pedro would pitch great, only to be stymied by the offense and their lack of scoring. That wasn’t the case on this day. The Sox got the only run they would need in the very first inning. I’m sure we all sat back at that point, assuming Pedro wouldn’t need any more than that. Just to be sure, the Sox added on eight more. The big bat was swung by Lou Merloni. Yup, that’s right. Lou Merloni. From the six spot, he went 3-5, drove in three runs, and scored two of his own. Quite a day for the Sox third baseman.

The goat of the day? I really want to hand it to Brian Daubach. Going 0-3 from the two spot when the teams is scoring in bunches is just frustrating. But, at least Dauber drew a walk. Mike Lansing didn’t even do that. Four infield groundballs were all he could muster on the day.

But, of course, it didn’t matter. The offense did more than enough when the best pitcher in history was on the mound.

And the scorecard shows how it happened.
Posted by Section 36 at 12:40 PM
Email ThisBlogThis!Share to TwitterShare to FacebookShare to Pinterest