Why Do the Brewers Have Sausage Races? 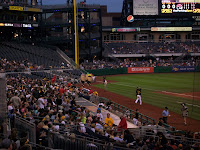 I know it’s not just them. I’ve mentioned the pierogi races in Pittsburgh. The Washington Nationals apparently have president races. The Texas Rangers seem to have legends like Sam Austin run around. I’m sure there are others I’m not familiar with yet. My question is, why do they all have them?

And, I know the short answer. Because it’s fun. They want people to have a good time at the games, and this is one way everyone goes home happy. Blah, blah, blah. I think it’s a waste, and not just from a purist angle thinking it’s a tacky thing you’re only supposed to see in the minor leagues. If parks want to have silly races, that’s fine. I just don’t know why they would.
What’s the goal of any baseball owner? Put the butts in the seats. It’s that simple. The best way to do it is by winning games. If you’re not winning, you need to find other ways to do it. I understand that. But, why a sausage race? Are people going to the park specifically to see the sausages? I doubt it. Do they have anything to do with a baseball game, or the Brewers? No. So, why do them? Why not just show the newest Harry Potter movie on the scoreboard during the games? It has nothing to do with baseball either. And, I bet more people would pay just to see it than would pay to see a five-minute sausage race.
If you’re going to have an extra fun activity like that, shouldn’t it be an opportunity to grow your fan base? I was at PNC this summer for a Pirates game. I saw the pierogi races. I thought they were cute. I even bought a pierogi magnet. It’s a corny little stuffed pierogi hanging on the fridge. It’s even wearing a baseball hat. You know what it’s not wearing? A Pirates logo. Any indication whatsoever that it’s affiliated with a major league baseball team. So, in reality, the Pirates almost did their job. The park got me to go to the game. The fun pierogi race got me to buy the magnet. But, it’s not growing from there. When people see the magnet on my fridge, they ask what it is. I say it’s a pierogi, and the conversation drifts into what exactly a pierogi is. Or, they ignore it. But, if it were something with a Pirates logo on it, the conversation would start with, “Oh, you went to a Pirates game. Did you have fun?” And the conversation would be about the Pirates, not pierogies. Or, even better, what if they had Pirate races? Or a Pirate, and a parrot, and a sword? Or just put a Pirates jersey on the Pierogi? What if the sausages wore Brewers jerseys? Or, what if they had stuffed versions of the current players? Then, instead of a pierogi on my fridge, I’d have a stuffed Andrew McCutchen magnet. If kids bought one, maybe they’d become Andrew McCutchen fans, instead of pierogi fans. The Rangers have the legends races. But, only the Nolan Ryan has anything to do with the team. Why? Why not have Nolan Ryan, Michael Young, Ted Williams, and Mike Whitt? Then when a kid asks about the races, they’d be asking about the Rangers. Why is Ted Williams in a Rangers jersey? Was Mike Whitt good? Interest would be piqued. Maybe the kids would read up on these other players when they got home? And the conversations in the stands would be about the Texas Rangers.
Not the Alamo.
Posted by Section 36 at 12:36 PM
Email ThisBlogThis!Share to TwitterShare to FacebookShare to Pinterest