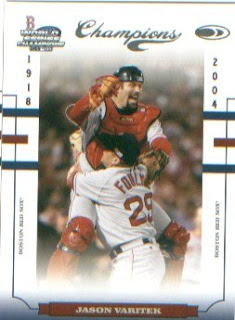 “A ground ball, stabbed by Foulke. He underhands it to first, and the Boston Red Sox are the World Champions!”

When Joe Castiglione uttered those words five years ago tonight, it meant many different things, to many different people. Some cheered. Some cried. Some did both. I always assumed that I’d jump up and scream. After all, when Luis Gonzalez dropped in the single to win the 2001 series, I danced around the room for quite a while. That was just a reaction to a Yankee loss. How could I not expect the same thing when the Sox finally won? Oddly, that’s not what I felt. It was relief. I sunk into the couch, and my body just went, “phew.” Finally, it would all be different.

Finally I could enjoy baseball more. The worst wasn’t always going to happen. (I don’t know about you, but I just knew that the only reason that the Sox came back from being down 0-3 in the ALCS was so it would hurt even more when they blew their own 3-0 lead in the World Series.) Sometimes, things would work out. I didn’t have to keep waiting. I didn’t have to worry about a team being THE team. It would all just be easier. The pressure was off.

That’s going to sound pretty pathetic to anyone who wasn’t a Red Sox fan in the leaner years. But, people who were around get it. It’s not that the Red Sox were my life. It’s that the Red Sox affected my life. I mentioned to someone recently that even now, I’d prefer a Yankee loss to a Red Sox win. Especially with two championships in recent memory. The response was that I was a little sad. And it does sound that way. It makes me sound like I’m sitting in my basement wishing misery on others. But that’s not it. The simple reason is that if the Yankees and Red Sox both lose, Yankees fans will leave me alone. If both the Red Sox and Yankees win on any given day, the Yankees fans are there annoying me. It’s the Yankees loss that’s important. Well, 2004 was the mother of all Yankees losses. Not only did they choke in historical fashion. But, the Red Sox finally had a championship of their own. A whole line of comments was now useless. I could go to Foot Locker without harassment from the guy behind the counter with the interlocking N-Y on his cap. Red Sox games were quieter the next year. The subway rides were easier to take. It all just got a little bit easier.

I will say that there was one problem with the Sox finally winning it. The Yankees fans stopped their “1918” chant, so I was never able to figure out why it was supposed to bother me. Either your team was the defending champ, or it wasn’t. Did it really matter if the Royals won a championship 20 years ago? Does that take the sting out of the 2009 team’s performance? Sure, Yankees fans think it matters that they won 16 titles before my parents were born. Doesn’t help me much though. Patriots fans are starting to realize that the Super Bowls they won aren’t enough anymore. It’s been five years or so since the last one after all. So, whether it was 5, 10, 20, 50, or 86 years…it’s all more than 1.

Whatever it meant, it all ended on this glorious day 5 years ago in St Louis, under a lunar eclipse, of a blue moon.

Posted by Section 36 at 7:02 PM
Email ThisBlogThis!Share to TwitterShare to FacebookShare to Pinterest