Magazines are a great Red Sox collectable. They have many of the same advantages of a newspaper, with several plusses of their own. 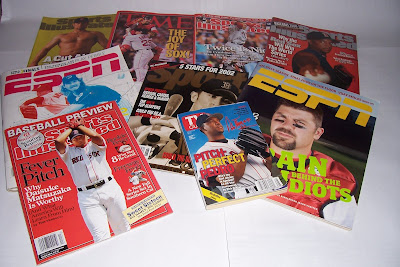 Like a newspaper, a magazine is a record of an event or team as it happens. The magazine is usually published a little bit later than a newspaper, but that can be a bonus. Usually the stories are a little more in depth and thought out. Rather than a simple retelling of game 4 of the World Series, for instance, a magazine article might dive into detail of the fans reactions, or what the players were going through. Magazine articles also tend to be less reporting, and more writing. So, a feature article of Pedro Martinez will read more like a biography than a recount in the sports section of a newspaper.

Another great thing about a magazine is the photography. Magazines are usually full of bright color photos to augment the article. If the Red Sox are featured on the cover, that another chance for a great visual of the hometown team. Red Sox covers are also great surfaces for autographs. Yet another way to enhance a Red Sox collectable.

I also like the size of magazines. They’re much more compact than newspapers, and quite a bit more durable. After all, newspapers are only supposed to last a day or so. Magazines have a much longer shelf life. They also store nicely if you grab a couple cardboard magazine storage boxes at your local office supply store. They’re even small enough to frame your favorites without costing an arm and a leg.

With any good collectable, there’s room to narrow down your collection to fit your needs. If you’re a big fan of the 2004 team, and why wouldn’t you be, you can collect magazines with cover features on that championship. You can collect the official Red Sox magazines they have at Fenway. Naturally, those will give you an in-depth look at the current Sox team. You can chase down every appearance of Jason Varitek on a cover. Maybe you like the writing in Sports Illustrated, and just want to focus on Red Sox appearances in that publication. As always, the possibilities are endless.

I love looking back at old magazines. How great is the cover feature in SI on Daisuke’s rookie season? Or their baseball preview featuring Pedro as the reason the Sox will win the World Series? (They didn’t) I can’t get enough of the cover story from ESPN the Magazine discussing the dominance of Pedro and Randy Johnson. These little glimpses into the Red Sox past are wonderful to dive back into.

Magazines are easy to find. Just swing by your local bookstore or newsstand. If you’re reading this, I’m sure you already subscribe to a sports magazine or two. If there’s a Red Sox player on the cover, just hang onto it. They’re fun to read over and over.

Anyone have a favorite magazine in their collection?

Posted by Section 36 at 1:28 AM
Email ThisBlogThis!Share to TwitterShare to FacebookShare to Pinterest
Labels: Collecting the Sox