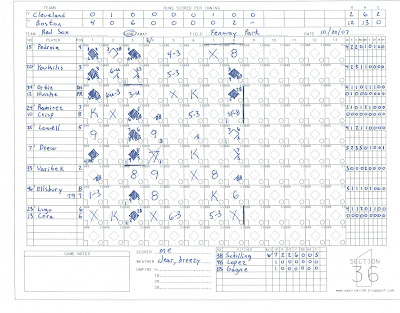 Any game six is a huge game. Obviously, one team is trying to close out the series. One team is fighting for their lives. In this case, the team one game away from elimination was the Red Sox. They needed to with to have any sort of chance. A couple things were in their favor. The game was at Fenway Park, and Curt Schilling was on the mound. If any team trailing in a series 3-2 could have confidence, it would be the 2007 Red Sox. They all knew that they just had to win these games at home, and everything would work out. This game also included the inclusion of Jacoby Ellsbury into the starting line-up. Coco Crisp was the established veteran. But, he had been performing pooly during the postseason. The fans had been calling for Ellsbury to get the playing time for a few games now. Francona finally agreed. When Jacoby was announced as the starting centerfielder, it brought a huge cheer from the crowd. things were looking up.

Right off the bat, things started to look even better. Schilling pitched a scoreless top of the first. The Red Sox jumped right out on the Cleveland pitcher, Fausto Carmona. Two singles and a walk loaded the bases with nobody out. With Manny coming to the plate, the chance for a big inning was right there. Manny couldn’t do it though and struck out. That was followed by a Mike Lowell flyout that didn’t get it done either. That brought up JD Drew. The confidence in the Fenway crowd was not very high. Drew was at the end of a controversial first season in Boston. He was signed to a huge contract at the start of the year, which was hotly debated. He wasn’t the type of player that Boston Fans usually fall for. He wasn’t a “Dirt Dog” like the man he replaced, Trot Nixon. His skill was obvious, but it just didn’t look great in the packaging. His first season was even worse. As he strode to the plate, most people in the stands assumed he’d find a way to ground into a double play with two outs. Which is why the results were so shocking. He lined a pitch over the centerfield wall for a first inning grand slam. As he circled the bases, the crowd went nuts. They stood for him, and demanded a curtain call. To his credit, he gave them one. Personally, I would have told them all to stuff it after all they had put him through. But, he appeased the crowd, and the Sox were on their way.

It wasn’t really a game after that. The Sox scored six more times in the third inning to make it a laugher. It was such a blowout, that Eric Gagne made an appearance in the eighth. The Sox won that game, and the next five to capture their second World Championship in four years. This was a huge game in that run.