Section 36 has another visitor! Jenna Martorana is a twirler, a baseball employee, and the current Miss Red Rose City. I’m so 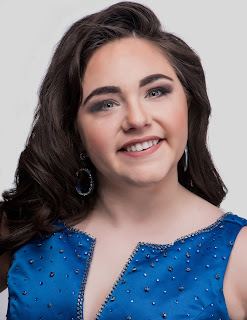 excited she was interested in visiting with us to discuss those topics, and a few more. I knowyou’ll love reading everything she had to say!

So, let’s see what happens when Jenna Martorana visits Section 36!

How did you celebrate winning the Miss Red Rose City crown?
I was in complete shock that I won! I was clapping for myself as I walked to be crowned I was so surprised. After taking tons of pictures and calling my family I went out to eat with my crown still on and treated myself to a big glass of coke! Anyone

who knows me knows I love my coke but am trying to cut back. I kept my crown on until I got home and took sleeping crown pictures with my dog Sophie and her crown! I also immediately made a list of appearances I wanted to participate in to advocate for my platform!

What has surprised you the most about your time with the Miss Red Rose City crown?
I think what has surprised me the most is how much of a difference I can actually make by just telling my story. It took me three years to work up the courage to compete because I didn’t think anyone would want someone like me as a titleholder but I quickly learned that wasn’t true. I have gained so much support for my platform by being transparent and real about my mental health. I have been able to inspire others to be open up about their mental health and trust me enough to share their stories with me. I often struggle with thinking I don’t have a purpose or not being good enough like a lot of people with mental illnesses so I never thought I could make so much of a difference to others by being me.

What was your favorite thing you’ve done during your time as Miss Red Rose City?
It is hard to narrow down what my favorites were but one of them 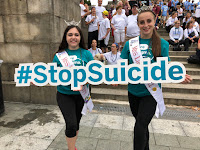 was the Out of the Darkness Walk in Philadelphia that the American Foundation for Suicide Prevention held. It allowed me to spend the day with thousands of people who are suicide attempt survivors like myself, lost a loved one to suicide or want to raise awareness for suicide prevention. I’m so grateful to have been able to participate with NAMI Bucks County and Montgomery County as well as with Brooke Glen Behavioral Hospital. Another amazing experience was being invited by Miss Pennsylvania 2017 to Hoffman Homes for Youth for Miss America Serves Day. Hoffman Homes for Youth is a psychiatric residential treatment center for children 6-17. The Miss PA Class of 2018 collected dresses for the girls ahead of time and did their hair and makeup that day so they could put on their own pageant! Each child had a sash with their power word on it and told the audience what their word meant to them. It was so special to share my platform with these kids because they are kids just like me battling mental illnesses. When I spoke of my platform, I saw the understanding on their faces and since this was the first time I spoke aloud about my story I realized why it was important I keep doing it.

How do you plan out your “color guard” talent performance? 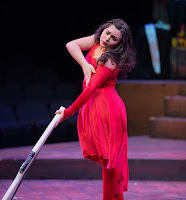 My current talent routine is actually part of my indoor color guard routine I did with my team my senior year of high school. I had shortened and changed the routine before to make it a solo to perform at baton competitions but then I cut it down even more to fit the 90 second time limit. It is a rifle routine to the Three Tenors “Hallelujah” that is dedicated to those who have served and those who are serving our country. I didn’t have to think twice about choosing color guard over baton twirling when I decided to start competing in January but I have often been questioned why I did it since baton twirling is considered a “pageant talent”. That’s part of the reason why. I wanted to be able to stand out and share something different with the audience. I love to perform and I feel I can put so much more of myself into my color guard routines allowing the audience an even better experience.

How did you select your platform, #CureStigma?
My original platform that I competed on and won with was called “Breaking Down the Stigma Surrounding Mental Illness by

Opening Up”. I told my story of depression, anxiety and OCD and encouraged other to share theirs because by putting a face to the illness makes it more than a diagnosis. I am very open about my battle with mental illnesses and post often on my social media about myself, tips for improving ones mental health and information to educate my followers about mental health and illnesses. Through my year I had the opportunity to work with local chapters of the National Alliance on Mental Illness which inspired me to change my platform slightly. A campaign they created is called #CureStigma and portrays stigma as a social virus that can be cured through compassion, empathy and understanding. My beliefs on mental illness align with NAMI’s and I think the #CureStigma campaign makes stigma understandable for people of all ages. I will continue to advocate for my platform even after I’m done competing because I will be starting my masters degree in school counseling at Kutztown University in January. I’m lucky that my university believes in the importance of mental health education and has its own NAMI club on campus that I am able to partner with in addition to other local county chapters. I am in the process of being trained to be on NAMI Bucks County’s speaking team who educates students on mental health and stigma to make their schools and organizations stigma free!

What is your personal fitness routine?

As someone who doesn’t enjoy going to the gym, I have to try and do things to make it fun! My best friend writes workouts for me to help keep me motivated including a pre Miss Pennsylvania workout plan! I have had a lot of injuries from color guard and baton twirling so I’m working to build those muscles back up while staying in shape. My favorite thing is riding the stationary bike while watching Netflix on my phone. 45 minutes will fly by that way! I will also mix in circuit training and classes like Zumba and yoga.

The past few seasons, you’ve been a diamond girl for the Reading Fightin Phils. What do you do in that position?
As a diamond girl I have a few different jobs I’ll do depending on where I’m scheduled. First Energy Stadium has three different buffet areas- the ‘67 Club, Bunbinos Tailagte and the Character Pool Party (yes we have a poo in the outfieldl!). If I’m scheduled at one of the buffets then I will check tickets and give the appropriate wristband out of five options based on the type of buffet and seating they have. The Fightin’ Phils are big on giveaways such as shirts and bobble heads so some days I could be handing them out at the main gate. Lastly we have 6 different mascots! The Crazy Hot Dog Vendor is the face of the Fightins and is their logo. There is also Screwball the baseball, Blooper the dog, Change Up the turtle, Bucky the beaver and Quack the duck. Some nights I escort one of them around the stadium making sure they get to greet lots of fans and give autographs.

and meet others in my community. I might not know much about baseball (it took until my second season to learn what a double play was) but I really enjoy being able to help the fans have a memorable experience.

What made you decide to work for a minor league baseball team?
Two of my older cousins had both worked for the Fightins and so that is basically how I ended up with the job. I really enjoy being apart of the Fightins family though because they’re such a major part of the community. The Fightin Phils created Baseballtown Charities to keep baseball alive for children in Reading. As someone with a degree in Applied Disability Studies, my favorite is that Baseballtown Charities started the Dream League for Children with Disabilities and with support from other local businesses recently completed a field for the Dream League kids which includes a playground useable for children of all abilities. I’m proud to be apart of an organization that gives back so much to its community including being one of my sponsors.

As always, I want to give huge thanks to Jenna for doing this interview. And I want to thank her for providing the amazing pictures to accompany the interview. They're really perfect!