Section 36 has another visitor! As I’m sure you can imagine, "36" is our favorite number here at the blog. I think it’s safe to say that 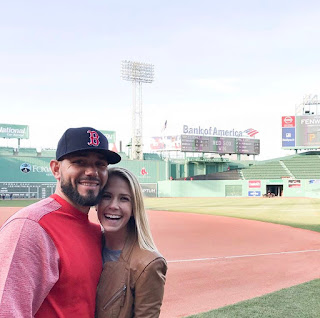 Chelsea Scott shares that opinion. After all, her husband, Robby Scott, has worn that number for most of his baseball career. (Even though he currently has to wear #63 for the Red Sox.) She’s also a fellow blogger, and frequent traveler. I’m so excited she was willing to take some time out of her busy schedule to visit with us and discuss those topics, along with a few more. I'm sure you’ll enjoy reading everything she had to say!

So, let’s see what happens when Chelsea Scott visits Section 36!

What made you decide to start your blog, “The Millennial Miss”?
As most of us do, I was going through an interesting time in life during my early twenties. I was in between jobs, living in a big new city and was navigating through different types of relationships.

I was feeling lost. Real lost. A pen in hand touching paper became a form of therapy for me.  As I was writing, I found myself in need of a space dedicated to millennial aged women who were fearlessly navigating through the world and all the twist and turns that life brings. I couldn’t find it so, I created it.

The Millennial Miss launched close to 4 years ago and it has connected me to a strong female community that I am thankful for each and every day.

I love the variety of topics you cover on your blog. How do you come up with the topic to write about next? 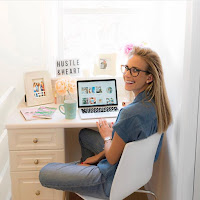 Thank you, I appreciate that! I find inspiration for my posts in a few different places. For some, I tap into my own personal carousel of experiences. For other posts, I spin off of something that a friend may be going through or an idea that sparked when overhearing a conversation while standing in line for coffee. My eyes and ears are always zoned in to brainstorm!

How did you and Robby meet?
Robby and I met in the hallways of high school. To be honest, I don't remember who passed the first note but I do remember that our first date was at California Pizza kitchen and our first kiss was in the school parking lot. We briefly dated my junior year, his senior year. Shortly after he graduated, Robby and I went our separate ways and as time passed we lost touch completely. Fast forward 5 years, we reconnected via a Facebook message and life was forever changed. For more of our story and how he proposed you can dive into this article!

You majored in broadcast journalism at the University of Alabama. What interested you about that field?
I remember being in 8th grade and rushing home from school so I 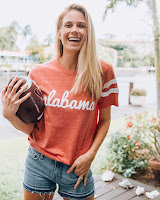 didn’t miss one second of TRL on MTV. Remember that show?! I would sit on the couch glued to the TV convinced that Carson Daly had the coolest job in the entire world.

I could geek out and chat for way too long about what I find interesting about this specific field but I promise to keep it short and sweet so I’ll just say this; being able to relay information to a mass audience is widely intriguing to me and I have a ton of respect for journalist across the board.

How often do you get to see Robby pitch in person?
With Robby being a relief pitcher, we are never entirely sure when he will see the mound. So, for 162 games there’s a 50/50 chance he will pitch. When taking that into account and mix in work, social and travel obligations – I do the best I can!! I will say this though, I may not physically be there for every pitch but I have never missed an inning, God Bless technology!!

You’ve been able to do a lot of traveling. What is your favorite place to visit? Why?
Most days, the airport feels like a second home! Travel is 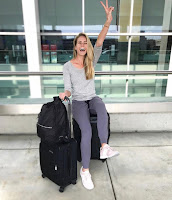 something that I have truly grown to love and my travel bucket-list is sky high.

During the baseball season, my favorite place to go is home, back to Florida. That may seem underwhelming but for me, it’s a little shelter from the chaos and busy schedules.

One of my favorite places that I’ve recently been to was Iceland. If you haven’t been, do yourself a favorite and set flight alerts because it is absolutely magical! Beyond that, I’m happiest with my feet in the sand so if the destination is tropical – my bags are packed!

With your traveling, and Robby’s constant road trips, what are your tricks to making the “long distance” part of your marriage work?
Let’s start with first things first; I believe that every relationship is unique in the way it successfully operates so what works for Robby and I may not be the perfect ingredient for your relationship. With that being said, I would say an ingredient to our glue is we rely on old school communication. That means, when we are apart, we communicate to one another via facetime or on the phone and try to refrain from texting. Speaking to one another with your own face instead of behind a screen makes a huge difference. Beyond that, 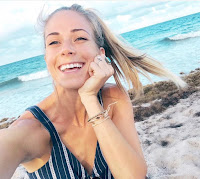 we lay out our schedules and find time to make our quality 1:1 time a priority. Even if Robby and I are only in the same place for 24 hours we make the absolute most of that time. Regardless of travel, everyone has busy schedules – right? Through my eyes, those “busy schedules” cannot be a crutch. Make time for the people that are important to you, no excuse.

Other than Section 36, what is your favorite feature or experience at Fenway Park?
Every single time Robby runs out of the bullpen at Fenway I get chills. It is by far one of the most humbling and exciting experiences I have been a part of. The environment at Fenway is unmatched and we are very blessed to have Boston apart of our chapter.

Thanks to your website, you have a pretty significant social media presence. How do you deal with the negative side of Red Sox fan social media?
Unfortunately, the negative side of social media it comes with the territory. To be honest, I used to let it get to me. I would sit on my phone scrolling through Twitter with rage coming out on my ears talking myself out of messaging every single one of them back. Robby on the other hand doesn’t pay any attention to it or give those people the time of day. It’s baffling to me the comments that people make because they feel secure hiding behind a screen. I think sometimes people forget that these players are more than a human body standing on a baseball field. They are in fact someone’s son, friend, husband, brother and just because they didn’t make a perfect pitch for the millionth time in a row they somehow deserve a wave a criticism. No one walks into their office after they didn’t perform at their best screaming slurs their way. Isn’t it funny to think about it that way?  But hey, if they get off by writing a rude comment on social media then, all the more power to them. I hope that one day they need to find something else to do with their time.

I'll have to agree with that. They really need to find something better to do!

I am so thankful to Chelsea for doing this interview. With the craziness of her schedule lately, I really appreciate the time she took to visit with us. She even went so far as to answer questions from the plane! I also want to thank her for allowing me to use the fantastic pictures to accompany the interview. They definitely help tell her story even better than just words could.