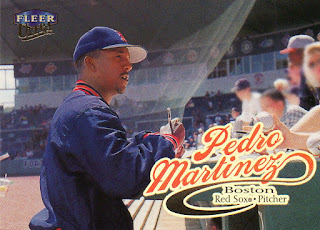 Yeah, this card makes me jealous. Why wouldn't I be? Look at all those fans getting not only an autograph from Pedro, but apparently engaging in some sort of conversation with him! That hardly seems fair.

The card has some other things going for it as well. You know I love the full bleed pictures. It's what cards should be. It's a different image than the standard "pitcher pitching" subject. I like that Fleer tried to mix things up a bit and go outside the box.

But, what's with Pedro's name? It's enormous. I know he's the focus of the card. But, why go to the full bleed picture if you're going to cover half of it with a flowing script name? Even if you thought his name should be big because, well, he's Pedro...did you need the extra flair at the end? The extra double swoop really makes it take up a lot more space than it needs to. What a way to take a good idea and just ruin it!

I do like how the rest of the info, especially the Fleer logo, is small and hidden. Pedro's name may be bigger than life, but at least his position knows not to cover up much of the picture.

And, lets be honest. while I admire the selection of a different picture...did it have to be that one? What's with Pedro's face? Was that the best they could do? I bet the picture taken just before or after that one would have been much better. But, I won't complain too much because I don't want to knock the attempt.

And I could have been on it getting Pedro's autograph!


Posted by Section 36 at 3:27 PM
Email ThisBlogThis!Share to TwitterShare to FacebookShare to Pinterest