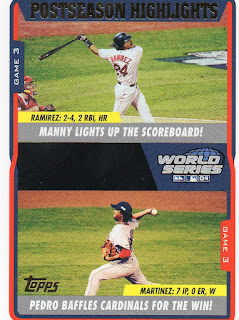 It’s always nice to remember some past highlights during a long season. This card definitely mentions one of the best.

Game 3 of the 2004 World Series was the last game Pedro pitched in a Boston uniform. So, it’s great to see a picture from that game on the card. It’s weird, because I don’t usually remember Pedro as having a great game that day. Probably the curse of comparing him to himself. After he struggled a bit in the first, I think I lost sight of his dominance the rest of the way. The initial struggles kept me cautious. That makes it even nicer to see the caption on this card. “Pedro Baffles Cardinals” is something I wouldn’t have said. But, Topps puts the stats right there to back it up. 7 IP, 0 ER. That’s all you need to know about Pedro’s performance.

As a longtime Manny Ramirez fan, I’m not going to complain about his inclusion on the card. His stats during that game certainly merit celebration. But, I do sometimes wish Pedro had gotten a solo card. Guess I shouldn’t be too greedy since he did already have one in this set.

When I talked about that card, I mentioned that I liked the way Topps was able to carry over the base card design onto the highlights cards. The crisscrossing ribbons along the border definitely tell you this is a 2005 card. While I was disappointed in the large ALCS logo on the other card, the World Series logo on this card doesn’t bother me at all. Maybe I just love looking at this logo more than the other one.

All of that combines into a great card. It celebrates one of the great games in Pedro’s Hall-of-Fame career. It reminds us all of the greatest stretch of games in Sox history.

And it reminds me once again of just how good Pedro was.
Posted by Section 36 at 3:11 PM
Email ThisBlogThis!Share to TwitterShare to FacebookShare to Pinterest