With Pedro Martinez’s election to the Baseball Hall of Fame, I thought it would be fun to take out my scorebooks and, like I did for Derek Jeter, see how he performed in games I attended. Or, as it turns out, at least in games I scored. I didn’t score every game I went to in 1998, so it’s possible I missed a Pedro game in there. I also didn’t always score playoff games, so I know I missed one there. But, how about in all the other games I went to?

I found scorecards for 25 Pedro games in my collection.

I’m going to stop right there for a second. 25 Pedro games? I had no idea it was going to be that many. How lucky was I to be able to get to that many games started by the best pitcher in at least a generation? You know how Peter Abraham  lists “Springsteen Shows: 118” on his twitter profile? I think I should add “Pedro Games Attended: 25” to mine. It’s like a badge of honor.

Anyway, how did Pedro do with me there personally cheering him on? 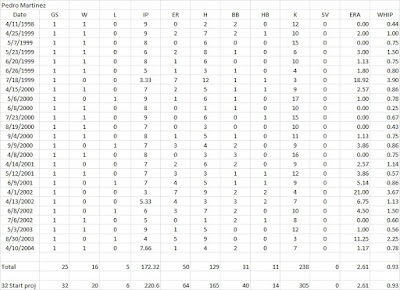 Those numbers are pretty dang good, eh? I would have expected nothing less. But, that’s just the numbers for 25 starts. What if we extrapolated them out to a full 32 start season? I’m glad you asked.

Want to get really crazy? Let’s have some fun. As luck (or lack thereof) would have it, I saw Pedro pitch three absolute stinkers. With such a small sample size, those skew the results a bit. Now, I hate it when people say “If you throw out all his bad games, he did very well.” But in this case, if you do throw out those three games, you get the numbers for the Pedro Martinez that pitched 90% of the time I saw him. Those numbers over a full season? 23-6, 1.72 ERA, 0.78 WHIP. 332 K. That would be an epic season. That’s the Pedro Martinez I saw nine out of every ten times I saw him pitch. That was the assumption. Amazing.

Even if I just take out his worst game. Now we’re getting to the 96% of the time Pedro.
Those stats would equate to a full season of 21-7, 2.29 ERA, 0.87 WHIP and 313 K’s. That’s why everyone always expected great things from Pedro. Just about every time I went to one of his games, that’s exactly what he delivered.

One more fun stat. I saw Pedro lose five games. (I know, I was amazed too.) If those five games were a full season, he would have a 4.36 ERA, a 1.12 WHIP, and strike out 307 batters. Which members of the 2015 Red Sox rotation do you expect to pitch better than that?

No wonder I enjoyed going to his games so much.
Posted by Section 36 at 3:15 PM
Email ThisBlogThis!Share to TwitterShare to FacebookShare to Pinterest
Labels: Live Stats, Pedro Martinez