From the Pedro Binder… 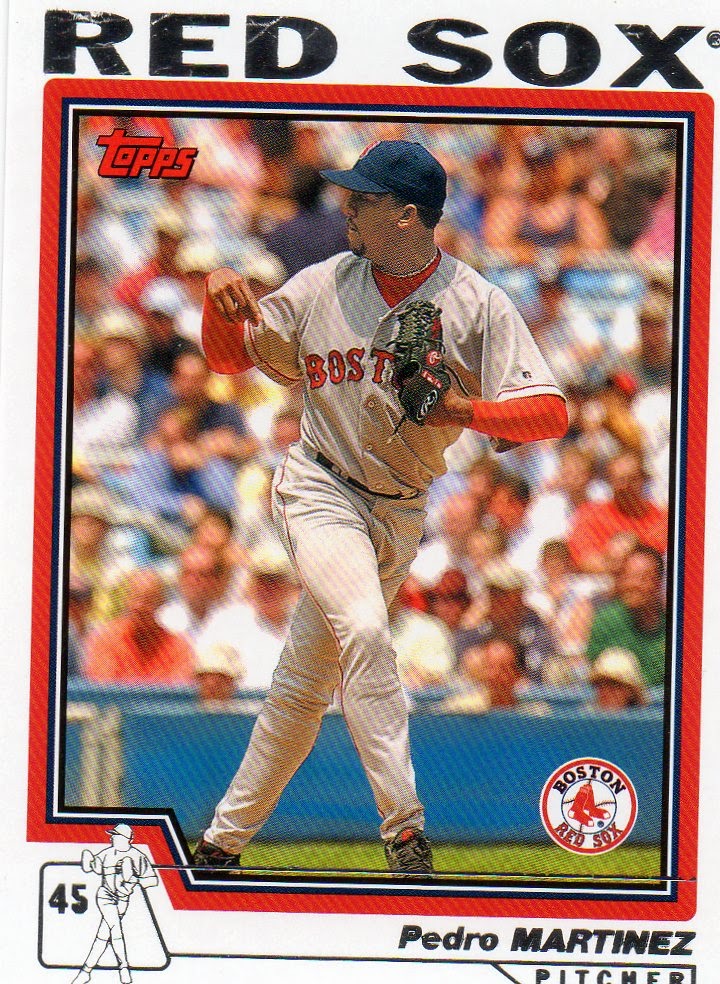 Luckily for all of us, my scanner was apparently able to capture an image of this card just before it was sucked away into a black hole. This way we are all able to admire it beauty…as long as we cock out head slightly to the right.

Is it a thing of beauty? Well, I guess that’s up for some discussion.

It certainly has a lot going for it. Frankly, most base cards to. There is a large picture, front and center. The team name is quite obvious on the top of the card, where it’s easy to read. The player’s name and position are nicely tucked into the corner. As a right-hander, I prefer the name to be on the left side of the card, to make for easy searching. But, that’s a minor point. The fact that the name of the player and the team are in foil continues to be a major point. Why Topps insists on making that hard to read is beyond me. There’s a simple red line tracing around an irregularly shaped border. As I’ve said before, there’s only so much you can do with a border, so a simple jog is a nice touch. Topps also added Pedro’s number, and a little foil sketch in the corner. I admit that it took me much too long to realize that the sketch wasn’t a generic one. It’s actually a smaller version of the main photo. Fantastic.

I like the photo itself, too. It’s not Pedro in mid-windup. He’s not staring down a hitter. It’s something different. To be honest, I’m not really sure what he’s doing. Is he leaving the field and telling the rest of the team to follow him? Is he directing a throw? Is he pointing out a tripping hazard?

What do you think he’s doing?

Whatever it is, it makes for a nice card. The picture is the main focus, and the design elements enhance that fact, as oppose to cluttering it.

Nicely done.
Posted by Section 36 at 4:24 PM
Email ThisBlogThis!Share to TwitterShare to FacebookShare to Pinterest