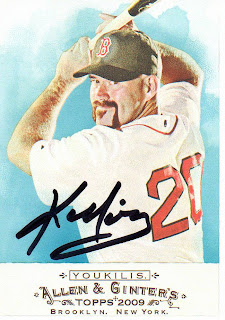 Red Sox opening weekend got another boost at Section 36 headquarters when Sunday’s mail brought the beloved self-addressed envelope. The postmark from Fort Myers Florida confirmed that goodness lay within.

Without being able to wait, I ripped open the envelope to find this beauty of a card signed by Sox star Kevin Youkilis. I found it interesting that one the very same day that Marie names him her most hated Red Sox; I would get this gift from him. That must be Sox karma of some kind.

The card makes a great canvas for an autograph. The solid background and old-fashioned painting really make the signature stand out. It was especially fortunate since this was not the card I sent to have signed. Frankly, I wasn’t pleased with the card I sent…a 2009 Topps Heritage. It contained a large headshot of Youkilis that I was afraid would obstruct a potential signature. Thankfully, that issue was avoided with the gem that Youkilis sent my way.

It made me wonder, though. This isn’t the first time I’ve gotten something back that I didn’t send in the first place. I understand when players send back pre-printed cards, or fan club information. They just have those made up ahead of time, and have them placed in the return envelope. But, what happens in this case? Does Youkilis, or one of his assistants, open up a whole stack of letters, and lose track of which cards went with which? It would make sense that they would just open the one letter at a time though. Do they do it on purpose? Do they just open everything, save the SASE’s and set the cards in a stack. Once Youkilis gets a minute, he signs the stack, and someone sticks the cards into whichever envelope comes up next. I guess that would make sense. Sort of an assembly line mentality. What about the times I’ve gotten more than I asked for? Juan Gonzalez once sent me two cards, neither of which was the one I sent. Former NE Patriot Chris Slade once returned the card I sent, along with six others. Is someone randomly stuffing however many cards they feel like into envelopes? Did Slade buy a stack of his own cards at some point, and pre-sign them? Then, he just added some to everything he sent out? Once again, the life of a professional athlete is a mystery to me, which shouldn’t be too surprising. No matter the reason, I’m pleased to have the newest addition to my collection.

A big thanks to Kevin Youkilis.
Posted by Section 36 at 10:27 AM
Email ThisBlogThis!Share to TwitterShare to FacebookShare to Pinterest
Labels: Kevin Youkilis, mail autos