I'm sure that you all remember that I finally completed my 1975 Topps set.
Now that it's done I thought it would be fun to look through the set and talk about it. Going page by page seemed like a good way to go about it. Hopefully you find it interesting to read what I have to say.
How about we continue with page 56? 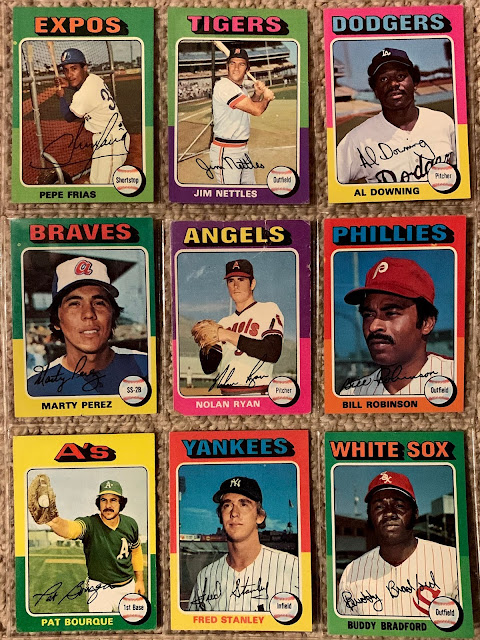 0. Not this time. Even worse? There's a Yankee.

Cards of young Hall of Famers are cool. While I don't know if Ryan is "young" in 1975 (he was 28 years old in his ninth major league season) he would go on to play another 18 seasons. I always thought the 1975 set was a great generational connector set. You had players from the 50s and 60s like Hank Aaron in the set, and you also had cards of players like Rice and Yount and Brett who would be stars into the 90s. Ryan pretty much does that all on his own.

I love the pose from Bourque. He's not replicating a swing follow though, or a throw follow through. Nope. He's a first baseman. So, he's replicating making the stretch and catch for a putout. Classic. But, even with that...how can I go against the Ryan here? Especially since I just called it a set defining card.

Posted by Section 36 at 1:36 PM
Email ThisBlogThis!Share to TwitterShare to FacebookShare to Pinterest
Labels: 1975 Topps, 1975 Topps Page by Page