Now that it's done I thought it would be fun to look through the set and talk about it. Going page by page seemed like a good way to go about it. Hopefully you find it interesting to read what I have to say.

How about we continue with page 34? 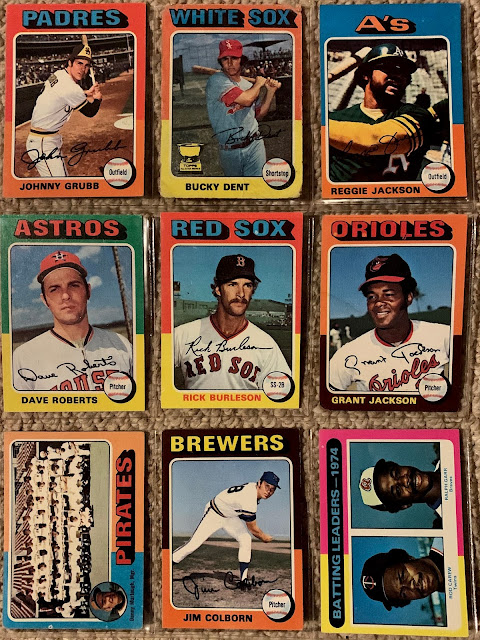 Cards that make the 1975 Topps set cool: So much on this page! Cards of young Hall of Famers are cool, while Reggie is old enough to have earned the #300, he definitely qualifies. As does the great league leader card featuring Rod Carew. Team cards are cool, like the Pirates on on this page. Managers as players are cool. Oh, wait...wrong Dave Roberts. Things that are definitely NOT cool? Bucky Flippin' Dent.

My favorite card on the page: Have to go with the Jackson. It's always nice to get a card of his before he was a Yankee. Which, would also apply to Dent. Imagine...he was just some guy who starred for the White Sox as a rookie...and not the manifestation of pure evil.

Posted by Section 36 at 2:56 PM
Email ThisBlogThis!Share to TwitterShare to FacebookShare to Pinterest
Labels: 1975 Topps Page by Page, Rick Burleson