Like most of you, I assume, I've been spending a lot of time lately watching highlights of the Red Sox 2018 playoff run. Whether that's highlights I can find online or, more recently, the official World 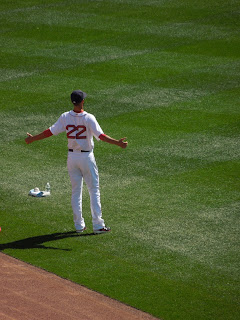 Series DVD I can't get enough. It's fun to watch everything over again without the stress of wondering what it would all mean. The loss in game three, and Eovaldi’s performance, is easier to appreciate when you know it doesn't kill the pitching staff and lead to the Sox demise. (As amazing as the performance was, since the Sox lost all it really did was blow their best reliever and save Drew Pomeranz. Hindsight being 20/20, it would have been better to put Pom in there and let him finish it, and save Eovaldi. But, that's a moot point now.) You can also pick up on things that you may have missed since they weren't as obvious as Eovaldi, Pearce, and Price.


For instance, the number of highlights Rick Porcello shows up in.


I feel like he was a bit of a forgotten man for the Red Sox this postseason. For the whole season, really. For a guy who won the Cy Young just two seasons ago, that's quite a feat. Maybe his two subpar seasons in a Sox uniform caused fans to give up on him. Or, at least give up on trying to figure him out. He can just do his thing, and whatever we get out of him will be great. He's not the presumed ace like Sale, and he's not highly paid like Price. He can just pitch.


Did you know he won 17 games this season? Second most in his career. And while wins don't mean as much as people like to think, it does mean he pitched well enough to keep his team in good position during most of the games he pitched. He then seemed to improve on that in the postseason.


His overall postseason numbers don't jump out at you, but that's because he was too busy being invaluable to the team to worry about things like statistics.


In the very first series, he showed he was willing to do whatever was needed, when he originated the “rover” role. I think most of us were surprised when he got the eighth inning of game one, since that meant he probably wasn't starting game three. All he did was get the two outs the Sox needed. He then came back and pitched well enough in his start to get the win in the game four series clincher.


Next series? More of the same. He got the key outs and a hold in game 2 in relief, and still took his turn as a starter. Now, I think he stretched himself a bit too thin, and his start suffered from it. But, the Sox still won the game.


I think by the World Series, he was getting spent. He didn’t appear in the first two games of the series. So, he was much fresher for his game three start...and it showed. He only made it into the fifth, but he was much sharper only allowing the single run. Of course, we all forgot about that after Eovaldi finished the game out.


It was also evident from the World Series DVD that his teammates respect the heck out of him, which isn’t something I quite realized. He’s clearly a leader of that staff...if not the clubhouse itself.


I’m glad watching these highlights brought me to this appreciation for him. Some other players may have been flashier, or had better stories. But, the Sox aren’t world champs without Rick Porcello.


It makes me even more excited for 2019.
Posted by Section 36 at 7:07 PM
Email ThisBlogThis!Share to TwitterShare to FacebookShare to Pinterest
Labels: 2018 World Champions, Rick Porcello