With the end of the year fast approaching, it's a great time to look back at the best parts of 2016. I'm sure there are some.

To that end, P-Town Tom, the wonderful author of the Eamus Catuli blog (who had PLENTY to celebrate this year) suggested a contest. All you had to do was select your favorite card of the year, and write a post about it. That sounded easy enough.

He didn't clarify if it was supposed to be a card you own, but it didn't matter. I knew exactly which card I wanted, and I knew I had it. It was a spectacular card of Jackie Bradley Jr in a full out dive catching a ball in the tip of his glove. Might be the best card ever. I just needed to grab it out of the binder... 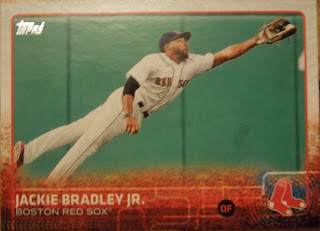 Looking through my 2016 cards, I found a couple options. I considered this card for a while. 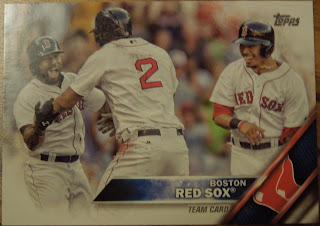 If you wanted a card that captured the excitement of being a Red Sox fan, this would be it. The three young stars that will be the future of the Red Sox dynasty all having a great time playing baseball. It's just about perfect.

But, 2016 was the year of David Ortiz, so I really HAD to go with an Ortiz card. This one seemed like the clear choice. 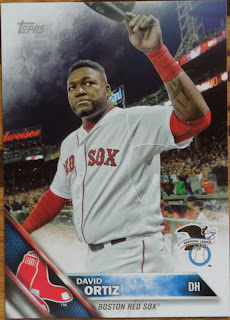 The 2016 Topps AL team set David Ortiz, showing Ortiz tipping his cap to the fans. I went with the AL team set version of his card because it's cropped much tighter on Ortiz than his base card issue. The card really says it all, and sums up the 2016 Red Sox season quite nicely.

So, it has to be my favorite card of 2016.
Posted by Section 36 at 7:08 AM
Email ThisBlogThis!Share to TwitterShare to FacebookShare to Pinterest
Labels: David Ortiz, Jackie Bradley Jr, Mookie Betts, Topps, Xander Bogaerts