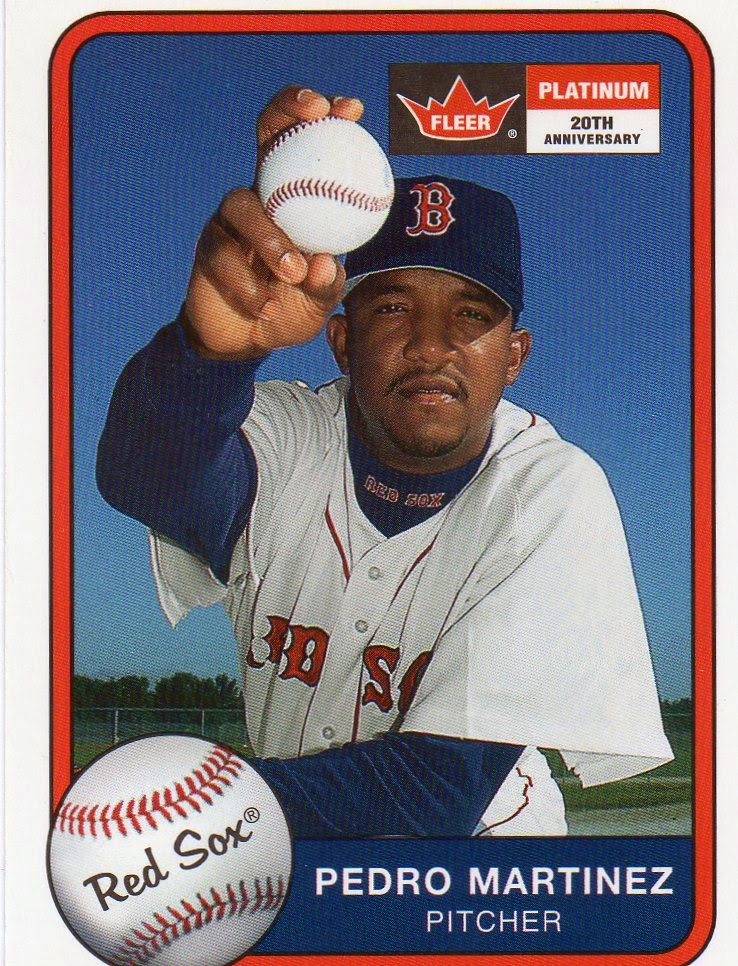 Once again, Fleer is using the Platinum brand to remind us of days gone by. In this case, just in case you missed the reference, they tell you that they’re celebrating a 20th Anniversary. That’s the give-away clue that the design is honoring the 1981 Fleer effort.

And, actually, they do a pretty good job of it.

I like the design. Maybe it’s because it is so much simpler than most anything else Fleer had going on. Maybe it’s the slight campy feel to it. Like a nice comfort food.

Or, maybe, it’s because in its simplicity, it managed to give me everything I look for in a card design. Other companies take note. The color scheme is matched to the Red Sox colors. That’s a nice improvement over the 1981 originals. Pedro’s name is written right there on the bottom, easy to read without any sort of foil coating. Just the name. Imagine. Below that is Pedro’s position. Again, easy to read. The team name is there, with the baseball adding just enough whimsy. All of that information is tucked out of the way on the bottom of the card, allowing plenty of space for the picture. Just like they were doing 20 years before. Wonder why they decided to mess it all up in between.

No idea if the posed action shot is supposed to be homage, or not. But, it’s fine. What’s not fine? Can you guess?

Look at the size of the Fleer logo! It’s almost as big as Pedro’s name. Even though they tried to stick it in the corner, like Baby, it wasn’t having any of that. It forced its way out and right into the way. Thank goodness it was just over blue sky. If it actually covered any of the Pedro image, I might have lost it.

But, even that can’t detract from the overall feel of the card. Some might think that 1981 Fleer isn’t the type of set you keep bringing back. But, in this case Fleer improved upon the design, while keeping true to the original.

Well done.
Posted by Section 36 at 3:19 PM
Email ThisBlogThis!Share to TwitterShare to FacebookShare to Pinterest