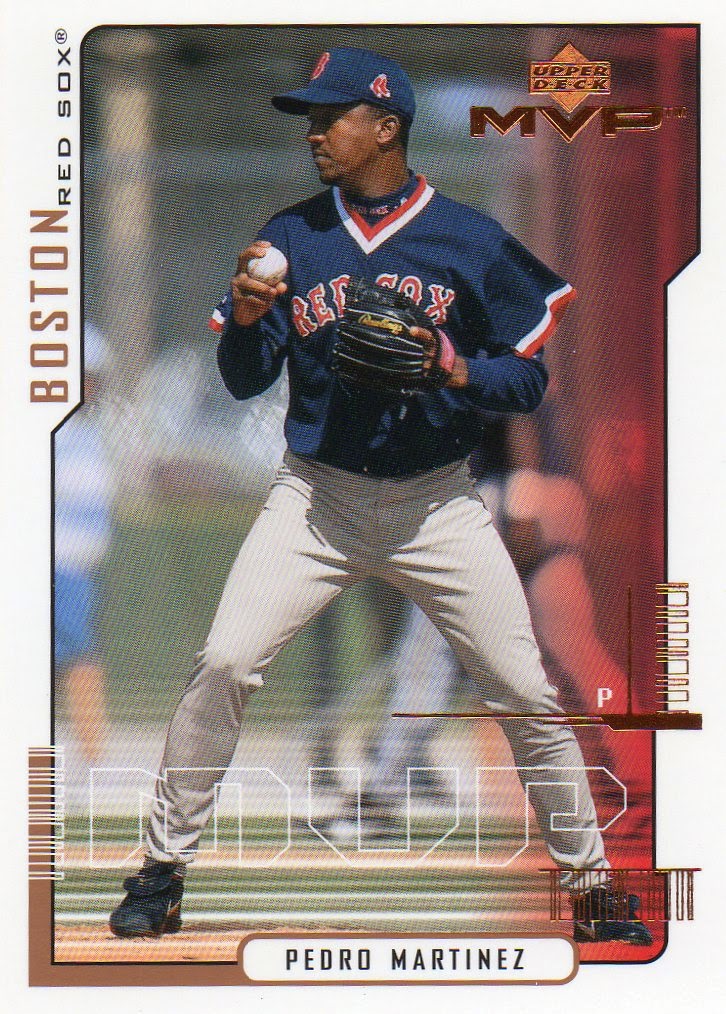 There’s simply too much.

I love a lot of things about this card. I like the irregular border. I have no idea why it’s not symmetrical, but neither is Fenway Park. So, I suppose I don’t mind it. But I like the idea of adding the visual interest to the border. Especially since it doesn’t encroach onto the picture too badly. I like how the UD MVP logo is tucked into a corner, and bronzed. It makes it a little more obscure that it would be otherwise. I like how the MVP on the bottom is just a ghosted outline. I like the design elements that float over the picture in a non-obstructive way.

This card looks like it was designed by a committee that couldn’t make any decisions. One person thought the angled cut in of the border was a good idea. They went with it. Another tossed out little foil squiggles. They went with it. Name inside an oval? Sure. Throw it all in there.

So, what could be simple and elegant turned out cluttered and distracting.

Which is too bad because the picture, while nothing special, is at least different. Pedro’s not mid windup getting ready to throw a pitch. He’s just stepped off the mound and is looking a runner back to second. I have to think that this is just a spring training drill. After all, when would a guy be on second with Pedro on the mound? It’s a dead giveaway.  Well, that and the guy in shorts standing in the outfield.

So, sometimes if you need to pick between one good thing and another, “both” is a perfectly acceptable answer.

Sometimes you can’t have your cake and eat it too.
Posted by Section 36 at 3:10 PM
Email ThisBlogThis!Share to TwitterShare to FacebookShare to Pinterest