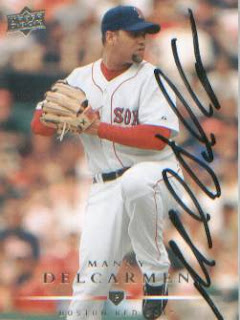 My complete hopelessness has been well documented. I look around at other blogs, and see request after request fulfilled. People are sending out autograph requests ten at a time, and getting responses in days. I, on the other hand, had been shut out for almost two years. But, this weekend that all changed. When I checked the mail, sitting there looking at me was the coveted envelope addressed to me in my own handwriting. It was an early Christmas present as I wondered what joys would lie within.

As always, the first thing I did was check the postmark, to see what clue that might provide. Brockton, Massachusetts. If I had thought about it, that would have been a huge hint. For some reason, though, I ignored it. I figured, of course a Red Sox player would have a postmark in the Boston area. So, it was only after I opened the envelope that I realized the card enclosed was signed by none other than local World Series hero Manny Delcarmen!

I love the way this card looks. It’s a classic pose of Manny, making for a great picture. Naturally, that’s why I sent it in the first place. I also like how Manny signed it vertically. It’s like he was thinking, “I’m not Mel Ott…I’m going to need some space.”

If you’ve been following along, you’ll remember that I sent this card out to Manny during Spring Training. So, that means I got a response in just about ten months. Not quite the ten days that other blogs report, but I’m certainly not complaining. I always expect a year anyway. What’s more interesting is the timing. Obviously, I know nothing about the wants and needs of a major league ballplayer. When I sent out the card, I mentioned that my fastest responses have been to Spring Training. My guess was that the ballplayers have less to do down there. They don’t have families, or chores, so might as well sit in the hotel signing fan mail. Once the season starts, they’re either living at home, or on the road. I always figured, that of the two, when the player was on the road, they might sign some things. Grab a sack, and sit on the plane and sign away. But no. Manny waited until after the season, when he finally had other things to do. He was home with his family, with household chores calling to him. This is when he found the time to answer my request. I thank him fully for it. It’s just not when I would have expected it.

So, this response has renewed my thirst. For one thing, it proves that I had the right address. I was beginning to wonder. So, with the offseason in full swing, I’ll be thinking of more requests to send out once Spring Training starts up. Of course, I’ll keep you posted.