Amanda Debus is not a Red Sox fan, but we won’t hold that against her. The current Miss Delaware has actually become a big Pittsburgh Pirates fan. But, I’m guessing that has a lot to do with the fact that her boyfriend, Chad Kuhl, is hoping to leave Spring Training as a member of the Pirates starting rotation. Since the Pirates open the season in a couple weeks against the Red Sox in Fenway Park, I thought it would be fun (and appropriate) to see if Amanda would be willing to answer some questions about herself, Chad, and her time as Miss Delaware. Thankfully she agreed.

So, let's see what happens when Amanda Debus visits Section 36!

You’ve worn a few crowns in your life. What was special about winning the Miss Delaware title? 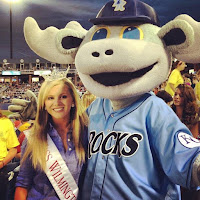 Each title (Miss Delaware’s Outstanding Teen 2008, Miss Delaware Teen USA 2011 & Miss Delaware 2016) holds a special place in my heart for different reasons. Winning Miss DE this year was pretty special though, given it was our 75th anniversary of the pageant. I’m extremely nostalgic, so being able to wear my state’s sash at Miss America, in historic Boardwalk Hall in Atlantic City, NJ — where so many of my Miss DE role models have walked across the stage before me — was awesome!

What has surprised you about your time as Miss DE?
I am always prepared for anything, especially this year, but one 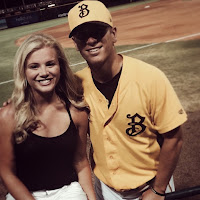 thing that has surprised me was the amount of support I have received over my choice in platform — ALL-AWARE: Allergy Awareness. I have been invited to speak at National food allergy conferences, State health fairs, and various interviews. The allergy community really stood behind me during my time at Miss America. I received so many well wishes from parents, teens, tons of people who have had their life somehow affected by allergies during their life. It was humbling to hear their stories.

What does the future hold for you after you turn over your crown in a few months? 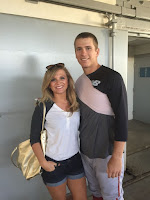 After I crown Miss DE 2017 in June, I plan on using my scholarships that I earned through competing and return to school. After finishing up my degree in the fall semester, I will be looking forward to teaching health and physical education in Delaware schools!

How do we help kids with food allergies in our schools, or wherever they may be?
When I was a kid, I was bullied due to my allergies and asthma, and I hate for students to be bullied, let alone bullied over health 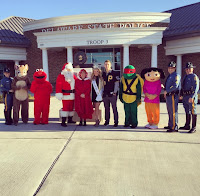 conditions. When I go into schools, I stress that it is important to be considerate with the needs of others. I teach kids to “Be a P.A.L: Protect A Life” — an initiative started by Food Allergy Research & Education, Inc. — which help children learn how to be a good friend to kids with food allergies.

How did you meet your boyfriend, Chad Kuhl?

We actually met in middle school! We were both in the same class at Everett Meredith Middle School in Middletown, DE. We then went to high school and college together as well.

Chad’s Major League debut was last year on a Sunday night against Clayton Kershaw. Quite a set-up. What was it like for you to watch that night unfold?
I was a barrel of nerves. I was fortunate to make it up to PNC Park to see his first game and it was amazing. Unlike anything you could expect! His family (Mom, Dad, 4 siblings & their significant others/kids), my mom, and some of his friends were there as well. If you watch the game, you can see me and his oldest brother behind 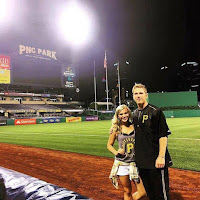 home plate, and we were going insane — especially during the home plate tag-out! Win or lose, I’m always proud of how he plays, but beating Kershaw was icing on the cake that night!

I’m sure you’ve spent a lot of time inside PNC Park. What’s your favorite feature?
The view, obviously! That’s what made me fall in love with Pittsburgh! The view of the bridges and the river is second to none. I like watching the game from the top of the rotunda sometimes, that way I can catch the city sights at the same time.

How do you deal with Pirates twitter, or other ways people express their opinions, when Chad’s on the mound?
I love hearing from his fans, I just don’t engage in the negative stuff. I’m not oblivious. I know that people like to ‘express’ their opinions during sports games, but those statements have no baring on how Chad will play.

I’m guessing you grew up in Phillies country. Was it tough switching allegiances to the Pirates?
My family is actually Baltimore fans. I grew up watching the likes

of Cal Ripkin Jr and Mike Mussina in Camden Yards. Luckily, they're in different leagues, so they don't often play each other. This year will be interesting, though, as there are two Pirates-Orioles series on the schedule. I’ll tell you how it plays out!

What are your hopes for Chad this season?
That’s simple — I’m just hoping he has a strong (and healthy!) year. He worked so hard over the off season, and during spring training. I’m just so excited to see what all comes of this season for Chad and the Pirates!

I think we can all agree with Amanda and hope for a strong and heathy season from Chad this season.

As always, I want to give a huge thank you to Amanda for taking the time to visit with us. It was exciting to be able to branch out with some new lines of questions. Another big thank you to her for providing so many wonderful pictures to go along with the interview. They definitely made the post much better.

Thanks again for the visit Amanda!
Posted by Section 36 at 3:08 PM
Email ThisBlogThis!Share to TwitterShare to FacebookShare to Pinterest
Labels: Miss America, Miss Delaware, PNC, visitors