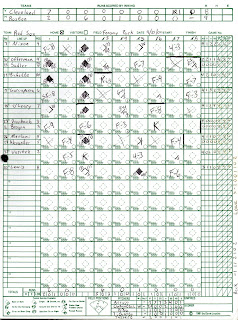 I hate boring games where nothing happens. Don’t you? Thankfully this certainly doesn’t look like one of them.

It really looked like two different games. The first three innings, and then the last six. Just look at those first three. Arrojo couldn’t get out of the first inning, giving up seven runs. Just flat out depressing. But at least the Red Sox came back and got two runs in the bottom of the first to at least keep a little hope alive. That hope was more than alive when the Sox put up six of their own in the third inning.

So there the game sits, 8-7 after three innings. Can anyone say “slugfest?” But, then there’s that final score of 9-8. So, 15 runs in three innings, and then two runs in the next six. Nice job by both bullpens. The Sox certainly used plenty of pitchers to get through their innings. But, for 8.1 innings, they only gave up one run.

Who swung the big bat for the Sox? Besides just about everyone? Well, everyone in the top of the order at least. I have to give the nod to Troy O’Leary. Not only did he drive in four runs, but they were four pretty important runs. He drove in the second run of the first inning with two outs, making sure they didn’t squander a chance to get back in it. Then, he followed that with a 3-run bomb in the third to tie the game. What a performance.

The goat of the day? Amazingly enough, I’m going with Brian Daubach. He followed O’Leary in the order that day. But, none of the magic was left over by the time he got to the plate. He was the only person on the Sox who came to the plate that day and didn’t get a hit. That’s just not going to do it. I’m also going to have to give a special goat award to Arrojo. It doesn’t show up on the scan, but here’s how his first inning went. Strikeout-groundout to get two quick outs. Then it went BB-BB-BB-2B-2B-BB-S. What on earth happened?

But, the Sox were able to overcome that debacle of an inning. They didn’t give up, and exploded on their own. A great win.

And the scorecard shows how it happened.
Posted by Section 36 at 12:47 PM
Email ThisBlogThis!Share to TwitterShare to FacebookShare to Pinterest