Section 36 has another visitor! June Klemmer is an avid traveler and the current Miss Bay State. She just finished competing for the Miss Massachusetts crown, but was nice enough to take some time out of competition weekend to visit with us to discuss those topics along with the Red Sox. I’m sure glad she did.

So, let’s see what happens when June Klemmer visits Section 36!

What made you decide to compete for Miss Bay State?
I always grew up watching Miss America on TV, but never knew what it took to be one of those girls. When I was in 7th grade, we had an "alternative career day" and a pageant queen came in. After speaking to her, and learning more about pageants, I immediately decided to compete. Through the process (it took about two years for me to actually enter the Miss America Organization) I worked with her and her mother, as her mother worked at my school. Fast forward to my first local as an Outstanding Teen, and that same girl crowned me as her mother sat in the audience in tears. It was truly a memory I will never forget, and is one that keeps me going at every competition, as it was truly a crowning moment for me.
As for the title Miss Bay State itself, I knew that if I didn't try just one last time this season, I was going to regret it. I couldn't through over five years of hard work down the drain in my pursuit for the Miss Massachusetts crown. 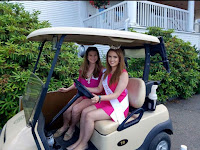 Your business manager is also your predecessor as Miss Baty State, Monique Vacon. How has she helped you prepare for the upcoming Miss Massachusetts competition?
Monique has truly been a blessing to me as Miss Bay State. Last year we competed together at Miss Massachusetts, and have been competing together for years. As my schedule is insanely busy at the moment, she has found ways to squeeze appearances in, and practically packed for me as I prepared for Miss Massachusetts. Without her, I am not sure that I would have felt so strongly prepared for the pageant.

What part of the Miss Massachusetts pageant are you most looking forward to?
Although I just compete in the preliminary portion of Miss Massachusetts, just being here for the week is my favorite part. All of the energy and excitement that surrounds you as you stand with the other amazing girls competing is so hard to describe, as everyone is so happy to be there, and has worked so hard to get

How did you decide on your platform, "Learn Something new! Encouraging a Higher Education."?
I originally chose my platform because I was an education major. As I moved away from education, I stuck with my platform because I now plan to work in alternative high schools as a social worker, and wanted to emphasize how we generally do not encourage at-risk youth to pursue a higher education.

What has surprised you about your limited time as Miss Bay State?
Honestly, it is so hard to surprise me now in the pageant world. But, after having not one but two talent costumes fail me for Miss

Massachusetts (the first one never arrived, and the second tore during rehearsal) I learned that I can take those unexpected bumps fairly well. It is always fun to learn something about yourself and surprise yourself like that.

You’ve done quite a bit of traveling in your life. Where is someplace that you haven’t been, but would like to visit?
I would love to explore more of this country, with a focus on California and that sates surrounding it. At this point that is the only part of the country I have not visited, and my goal is to reach all 50 states.

Growing up in North Carolina, you were pretty far removed from Major League Baseball. What’s something you have noticed about Red Sox fans now that you’re immersed in Red Sox Nation?
Oh. My. Goodness. Y'all are crazy with baseball. As someone who didn't really grow up with the sport, its crazy to me. Personally baseball is something I do not follow (or any sports for that matter) but I do not think i have ever seen so many people wearing shirts for a team like they do for the Red Sox!

If you had two tickets to watch the Red Sox in Section 36, who would you bring to the game with you?
I would most likely bring my boyfriend with me, as I am sure he would be thrilled to go to my 1st major league baseball game with me.

How do you think the Red Sox will finish the 2017 season?
To be honest with you, I don't even know how they are doing now. But I hope they finish well! It seems like everyone is just slightly happier when their favorite team wins.

Hard to argue with that plan! Love how she can so easily see Red Sox nation in full force!

As always, I want to send a huge thank you to June for taking the time to visit with us, especially at such a busy time! I hope you enjoyed the visit as much as I did. Another big thanks for supplying the pictures included with the interview. They really make the interview much better than it would be otherwise.

If you want to find out more about June, you should definitely check out her official Facebook page. It's a great way to follow along with her on her Miss Bay State journey.
And good luck to June as she finishes her time as Miss Bay State!