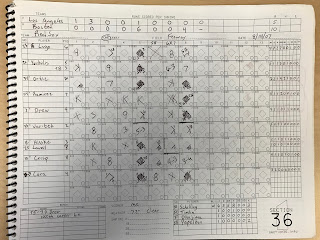 OK, what do we have here? Today I decided to flash back to a game in the fantastic season of 2007. The Sox were on their way to winning the division, finishing with the best record in the American League. This team had some skill, and the scorecard from this game shows exactly that.

Let’s start with the pitcher box. This box sums up this gave very well. Curt Schilling struggled out of the gate, only being able to go six innings while giving up five runs. But, the rest of the bullpen was able to shut things down to allow the Sox to stay in the game. In fact, that pitcher succession would be seen again in the World Series, simple removing the need for Timlin. This game was also closer than the final score would indicate, because of the Sox scoring so many runs in the eighty. When Timlin and Oki were in there, they were in a hold situation. Then the offense did their thing.

Speaking of the offense, Wow. Just look at it go. As always with these old cards, the names are fun to look at. Julio Lugo leading off? Alex Cora at second base?

I love the Manny Ramirez line. Could there be a more “Manny” outcome? He started with four swinging strikeouts. But in the eighth he followed an intentional walk by driving in two huge insurance runs with a double. With that double, the Ortiz-Manny combo ended up with fantastic number, driving in six on the ten runs (thanks to an Ortiz grand slam) and scoring three of their own.

The hero of the game? Have to give that to Ortiz. His go-head grand slam in the fifth was enormous. Clutch, you might say.

The goat? I usually give the horns to a batter. But, the only starter who didn’t score at least one run was Varitek, and he went 2-5 with an RBI. So, I’m going to hang them on Curt Schilling. Five runs in six innings is just not what you’re looking for. He’s lucky the offense bailed him out, of it would have been a disaster.

But, the offense did bail him out. JD Drew collected his 1000th career hit on the way to an eventual blowout.

And the scorecard shows you how it happened.
Posted by Section 36 at 6:34 PM
Email ThisBlogThis!Share to TwitterShare to FacebookShare to Pinterest
Labels: Curt Schilling, David Ortiz, I Scored, JD Drew, Manny Ramirez, Mike Timlin