I’m still not quite ready to call this a TTM success. After all, when I sent the request out, I only asked for one thing. I didn’t get it. So, I have a hard time labeling this as a success. But, take a look at what I did end up with. 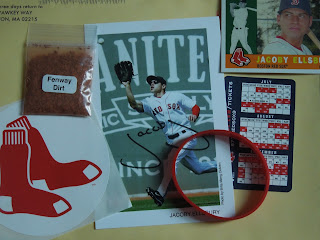 This is my haul from a Jacoby Ellsbury request. This was a total shocker to me. Best as I can tell, I sent this request out a few years ago. Spring Training 2010. So, it’d been a while.  But, it was probably worth the wait. The thing that pops out in the middle is the preprinted “autographed” photo card. As I’ve mentioned, this seems to have become the standard Red Sox response to TTM requests since it’s about the fifth one I’ve gotten. I don’t know if they only do it for the stars, or if David Ross would also send one out. I’ll have to try and find out. Looking at the signature on the card, I can’t think it’s real. It just looks preprinted to me. Interesting signature too. Just the first name. You’d think that if you were signing something to be reprinted thousands of times, you’d go the extra mile. The printing of the name also catches you off guard. I will say, though, that the flowing loops of the J and the y do make for an interesting visual.

I’m fairly certain that the card in the upper right is the one I sent. Like I said, it’s been a while. But, it looks like one I would have chosen.

I’m wondering if the schedule card is the official replacement of the standard pocket schedules. Has anyone seen a 2013 version of the pocket foldouts? If this is the new direction, I’m not a fan. Granted it’s nice to not have to fold open the schedule to read the games. But, from a collectable standpoint, it’s absolutely blah.

The red circle is a Red Sox bracelet. You know, those livestrong-style bands that are popular now. I probably won’t be wearing it.

There’s a logo sticker too. I’m sure that Jere will be thrilled to see that they’ve used the correct primary logo on the giveaway. Although, since they used the hanging sox, they avoided the confusion of picking the correct secondary circle logo.

They also included a little bag of Fenway dirt. That’s pretty cool. I’ve had the chance to be on the field at Fenway a couple times. Each time I managed to grab a pinch of dirt from the warning track in front of the Sox dugout. This dirt seems to be smaller grained, and redder. Could this be infield dirt then? I wonder how many TTM requests I would have to send out before I could cover my front yard in Fenway dirt.

So, while not quite a success, this was a great package to get in the mail.

Thanks Jacoby!
Posted by Section 36 at 3:11 PM
Email ThisBlogThis!Share to TwitterShare to FacebookShare to Pinterest