So Let it Be Done 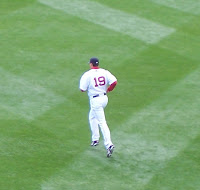 Casey Kelly has some work to do. There may not be a spot open in the Red Sox rotation for quite some time. The Red Sox announced that they locked up ace Josh Beckett with a four-year extension yesterday that pretty much sets up the rotation for the near future. They now have Josh Beckett signed through 2014. Jon Lester is under contract until 2013, with a club option for 2014. John Lackey is locked up through 2014. Daisuke is still under his mammoth contract in 2012. Heck, even Tim Wakefield is here another year. That leaves the likes of Buchholz, Bowden, and Kelly playing the waiting game. All five current starters will be under contract next year. Amazing. The first opening doesn’t come until 2012 when Wakefield will ride off gracefully. (Although, what if he’s only a win or two short of the Red Sox record at that point?) That spot looks to be Buchholz’s to lose, provided he doesn’t rip it away from Wake before then. It’s another year after that, in 2013, when Dice-K’s spot become available. At that point it’ll be a full out battle for that one spot, since it will be two more years before there’s another opportunity.

I could argue, that it was pretty poor planning on Theo’s part. As it stands, his three aces will all come of the books the same year. That doesn’t leave a lot of opportunity for transition. In 2014, they’ll have a big three. In 2015, they need three more starters. Would have been nice to stagger those a little bit more. Oh well.

But, if you’re a young pitcher in the Red Sox organization, how do you feel now? Are you crushed that yet another door has been closed in your face? I’ve said before that the only thing I ever liked about Curt Schilling was his confidence. Most other players say they want to go to a team so that they can win a ring. Curt was the only player I’ve ever heard of have the attitude that wherever he went, he would help win a ring. Apparently, for all their egos, other baseball players are a bit unsure of their abilities. It would be great if Casey Kelly looked at the rotation and said, “That’s OK. I’ll just show them that I’m better than Beckett. They’ll have to free up a spot for me.” But, that attitude doesn’t come around very much. Is he now showcasing himself to other teams? Is he trying to get himself included in that deal for Adrian Gonzalez? Does he resign himself to the fact that he’ll be a minor league pitcher for the next five years? Is he disgruntled? Is he unhappy? Disappointed?

Or does he think, “That’s OK. I only need one spot”?
Posted by Section 36 at 6:34 PM
Email ThisBlogThis!Share to TwitterShare to FacebookShare to Pinterest