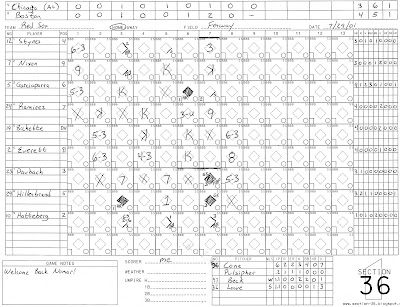 Once again, the most important thing about this scorecard appears in the “Game Notes” section in the lower right. I excitedly exclaimed “Welcome Back Nomar!” Yup, this was Nomar’s first game back after having wrist surgery on Opening Day. At the time, the thought was that with Manny Ramirez in the line-up, if the team could just stay close until Nomar was back, he could carry them the rest of the way. The Sox were finally at that point. Nomar was here to save the day. How’d he do? Looks like he did just fine. he went 3-4, with 3 RBI. Yup, he was here to save the day.

David Cone looks to have gotten the start that day. His line looks pretty good. A quality start, giving up only 2 runs in six innings of work. But, as had been the case all too often, the Red Sox were having trouble scoring runs. The Sox were training 2-1 when Nomar came to the plate in the sixth. He tied the game with a homerun (to centerfield). Just like he was supposed to do. The very next inning, he came to the plate with the Sox trailing again. His single, however, drove in the go ahead runs for the Sox. So, that’s two straight innings with clutch RBI. The hit in the seventh inning came with two out. It saved an inning in which it looked like the Sox could squander three lead-off baserunners. Nomar to the rescue.

Who else had a hand in the victory? Shea Hillenbrand scored two runs, and had a homer of his own. Other than those two, the only other members of the team with hits were Chris Stynes and Scott Hatteberg. They each had singles. No wonder fans were so excited to get Nomar back in the line-up

The 2001 Red Sox were supposed to be studs. The trio of Manny, Pedro and Nomar should have led them to the promised land. But, they ended up finishing second in the division, and missed the playoffs. But, for one bright day, everything was rosy in Fenway Park. The Sox won the game. Nomar had arrived on his white horse to save the season. All was right in the world again.

And the scorecard shows how it happened.
Posted by Section 36 at 9:36 AM
Email ThisBlogThis!Share to TwitterShare to FacebookShare to Pinterest
Labels: I Scored, Nomar Garciaparra