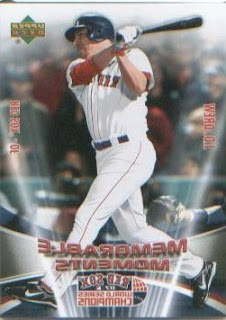 Yup. It’s that time of year again. April Fools Day. Kids all over the world will be playing tricks. Blogs all over the world will be writing fake posts trying to trick you into believing that the Red Sox traded Jed Lowrie for Derek Jeter, or that Alex Rodriguez revealed he’s decided to call himself Alexi as he begins the sex change process. (Ok, that one could be true.) But you won’t see any of that here. There’s no room in Section 36 for silly gags. (Your shoe’s untied) But, there are a few interesting Sox tidbits that deserve comment. (Admit it. You checked to see if your shoe was tied or not)

David Ortiz announced on his blog that he will be a late season addition to the cast of Dancing With The Stars. Apparently, once the number of contestants gets down to five, they’ll add on Big Papi as a new twist. By adding in fresh contestants mid-season, the judges will have to adapt their scores to a varying degree of ability. It adds a new dimension to both the judging, and the call-in voting. I really like the idea of this. For one thing, while Papi is training it opens up the DH spot. This will give Mike Lowell the needed at-bats to showcase himself to other teams. Plus once Ortiz returns to the team he should, once again, are in the best shape of his life.
Sticking with the TV shows. It was announced that Dustin Pedroia would be the new judge on American Idol, once Simon steps down at the end of the season. Apparently Pedroia was “pumped” at the chance to be on TV every week. The only real complaints came from the producers of the show. They don’t like the idea of needing to buy a new judges desk. At the tryout, Pedroia was unable to see over the top of the current desk. There hasn’t been an announcement yet as to whether the new desk would also have an additional spot for Dustin’s ego. But, Pedroia has promised not to hold back during the show. His comments will be swinging from the heels, directing laser shots at the poor contestants. I think this is a great idea. The Idol gig will have limited impact on the baseball season, since it is less of a time commitment than DWTS. Having the Red Sox become more of a media empire is always a good thing. Go Dustin!
JD Drew was with the Red Sox team yesterday. Apparently he had been missing for several days, but nobody noticed. I know I didn’t.
As part of his new “open communication” with Red Sox team officials, Daisuke Matsuzaka revealed that he had a couple new nagging injuries. He obtained a slight sunburn on his ear during workouts last week. He also received a bad haircut last weekend. He assured management that neither injury will affect his performance. The larger news, however, was that his left foot was amputated this off-season in order to prepare himself for the next WBC. This is causing him to alter his throwing motion, putting additional strain on his shoulder. He had planned on stoically working through the condition, but decided it would be best to let the Red Sox in on the news. I think this is great news. After so many years of Daisuke keeping everything to himself and pretending it’s all-OK, he’s finally adapted. I think this will lead to a fantastic relationship between him and the Sox.
Theo Epstein announced that he had finally listened to all the talk show callers. He doesn’t know what he was thinking with all the “pitching and defense” talk he had been spewing. As such, he has traded both Jon Lester and Josh Beckett to the Tigers for Miguel Cabrera. To free up a place for Cabrera, he has waived Adrian Beltre, and traded Mike Lowell to the Twins for a player to be named later. He said that despite that the rotation is now one of the worst in the league, the addition of Cabrera to the line-up should offset that when he drives in 114 runs this season. It really is all about the RBI. I’m once again with Theo on this one. Who needs run prevention if you can win every game 8-7? Surely a rotation of Lackey-Wake-Buchh-Bowden-Dice will be plenty.
Other than that, things around camp have been eerily quit as the Sox prepare to open the season Sunday night. Feel free to now check out other blogs for corny April Fools Day posts.
Really. Your shoes are untied.
Posted by Section 36 at 12:01 AM
Email ThisBlogThis!Share to TwitterShare to FacebookShare to Pinterest