On Saturday, the Red Sox held Childhood Cancer Awareness Day at the ballpark. As part of Childhood Cancer Awareness month, the Sox took the opportunity pregame to honor survivors of, or those dealing with, childhood cancer, as well as those helping to find a cure. With their long-standing relationship with the Jimmy Fund, it was certainly a cause the Sox are familiar with.

As part of the ceremony, Morgan Dzicek was given the opportunity to sing the national anthem. 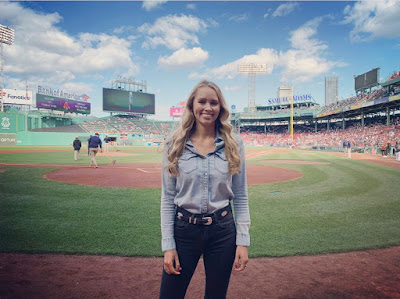 Morgan was the perfect choice, for a few reasons. For one, she is a childhood cancer survivor herself, having been diagnosed with a rare form of cancer at the age of 13. It took 40 rounds of radiation over the next four years before she was declared cancer free at 17.

Morgan is also currently a member of the New England Patriots Cheerleaders. With the Patriots opening their season the following night, the crossover appeal is obvious.

Finally, Morgan is simply an amazing singer. She's a graduate of Berklee College of Music, and even has her own single on her resume. Released last fall, “Every Step of the Way” is an incredibly beautiful song about her battle with cancer. The video for the song was just released a few days ago. Check it out below.

As we continue to celebrate Childhood Cancer Awareness Month, there are naturally several ways you can help out.

Morgan herself is personally passionate about “Make-a-Wish Massachusetts and Rhode Island”. It was with their help that she was able to record “Every Step of the Way”. But, certainly do whatever you can to help those suffering from the effects of childhood cancer, whether that's through Make-a-Wish, the Jimmy Fund, or another option of your choosing.

I also assume that you're going to want to hear "Every Step of the Way" over and over. I know I did. In that case, you're in luck! It's available on Spotify, apple music, and basically anywhere else you get your favorite music.

Be sure to go find it now!

Posted by Section 36 at 3:06 PM
Email ThisBlogThis!Share to TwitterShare to FacebookShare to Pinterest