A while ago, a neighbor of mine mentioned that he decided it was finally time to sell some old baseball cards he had been holding on to. He asked if I’d be willing to look through them and see if any of them were worth anything, and how much he might be able to get. I had two immediate thoughts.

1. Of course I’m willing. Any excuse to flip though baseball cards is valid in my book.

So, you can imagine the range of emotions that came over me when I laid my eyes on this. 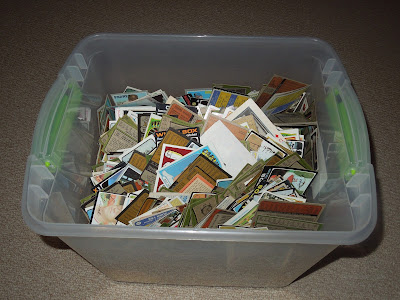 CASUALLY TOSSED IN A PLASTIC BOX!

What could be in there? Munson? Fisk? Schmidt?

Dear me, what will I do if I find a Schmidt in the bottom of that box folded in half? Part of me hoped there wouldn’t be anything decent in there. Not sure I could take it.

The first thing I did was see just what I was looking at here. So, I sorted them out into the different years. Once they were all neatly stacked, this is what I had. 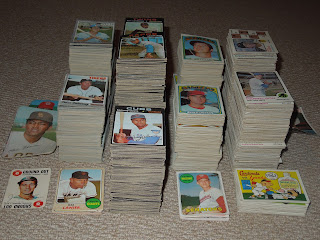 So, what was in there? I’m not telling yet. I thought it would be more fun to give each year its moment in the sun. Today, I’ll do the ’68 and ‘69’s since there were only a couple. Thankfully, those couple included these Denny McLains, fresh off his 30+ win season. Not a bad beginning. 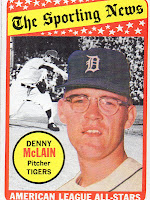 Like all the cards, the condition is exactly what you’d expect from cards in that era that had been tossed in a box. Not as many completely destroyed cards as I feared. But, not exactly any corners I worried about cutting myself on. Still, of course, lots of fun.

More to come!
Posted by Section 36 at 12:40 PM
Email ThisBlogThis!Share to TwitterShare to FacebookShare to Pinterest