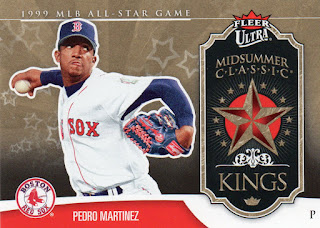 Talk about an appropriate inclusion in an insert set. If you’re going to make a set with players who dominated an all-star game, Pedro has to be in there. His performance where he struck out Barry Larkin, Larry Walker, Mark McGwire, Jeff Bagwell, and Sammy Sosa gets more impressive every year.

What about the card itself? It’s walking a fine line. When you have a set with an overpowering logo like this one, you run the risk of the whole set looking the same. But, the picture of Pedro is still prominent enough that I think the design is consistent, rather than repetitive. The card has all the important information on it. Name, team logo, position. It lists the game that they’re talking about, where he became a king. Since Pedro was with the Mets when this card came out, it was a nice reminder to see him in the Sox uniform. The photo even has the all-star game patch on Pedro’s sleeve. That’s fantastic.

This is one of those cards I look at and wonder what goes into the design process. Look at the red section with the player’s name. The white border above it follows a sweeping arc across the bottom of the card. I get it. I’ve said many times that there are only so many things you can do to spruce up a rectangle. A flowing arc is a popular solution. The red portion mimics that sweep…to a point. Then it just stops. Why? It goes off from that weird little angle point, and sweeps towards the bottom of the card. Why that sweep? It doesn’t mimic the logo. It seems to serve no purpose other than to add another angle to the overall look. Was that discussed in the design meetings? Did it originally go all the way across the card, like the white? To me, it makes the design a bit more awkward.

Overall, there’s a bit too much bad about the design for me to really like the card. The logo is too prominent. That red section. It doesn’t quite work.

But, it’s close.
Posted by Section 36 at 6:36 PM
Email ThisBlogThis!Share to TwitterShare to FacebookShare to Pinterest