Now that it's done I thought it would be fun to look through the set and talk about it. Going page by page seemed like a good way to go about it. Hopefully you find it interesting to read what I have to say.

How about we continue with page 15? 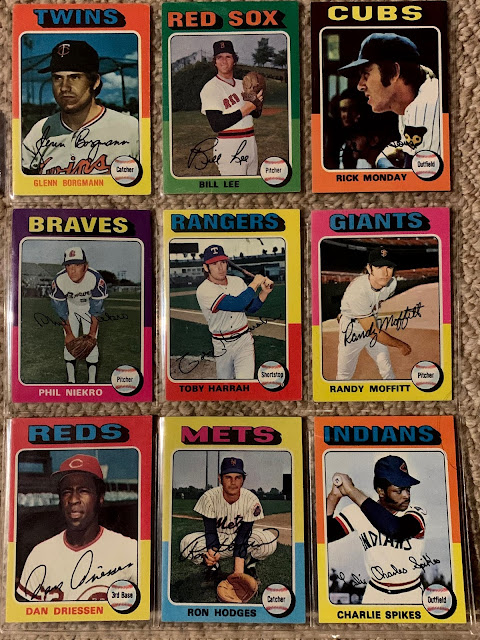 Red Sox Cards on the Page:  1. Bill Lee. Bill had a very good regular season in 1975, and had two no-decisions in the historic 1975 World Series.

Cards that make the 1975 Topps set cool: Naturally, 1975 World Series participants are always cool. While Driessen only had two plate appearances in the series, he makes two cards on this page from that series. Also, young cards of Hall of Famers are cool. I'm not sure the Phil Niekro counts as "young" since he was 36 in 1975. But, that did represent the midpoint of his 24-year career.

My favorite card on the page: Have to go with the Niekro. As someone who I remember playing, it's fun to think of him on a card from so long ago.

Posted by Section 36 at 3:06 PM
Email ThisBlogThis!Share to TwitterShare to FacebookShare to Pinterest
Labels: 1975 Topps Page by Page, Bill Lee