I'm going to let you guess how fans reacted.


It's the last couple of ones that bug me.


Let's be clear. I want people to be able to go to games. I've said before that I'm amazed teams don't give away more free tickets. (It appears that the Sox have finally listened since they said they plan on having more heavily discounted or even free tickets available to some games in the future.) But, that doesn't mean all tickets need to be free. And it's not something that the Sox alone are guilty of. Taking an outing to any activity has an associated cost. Sure, a Tier 3 ticket in Section 36 will run you $37. Going to a museum? Expect to pay between $20 and $40. Going to a Broadway show? Triple that. At least. Compared to other family type outings, the Sox aren't out of line. In fact, considering the amount of time you spend at those other places compared to the length of a ballgame, the Sox are practically a bargain. So, how come people don't storm Twitter complaining about the prices of the Children's Museum? 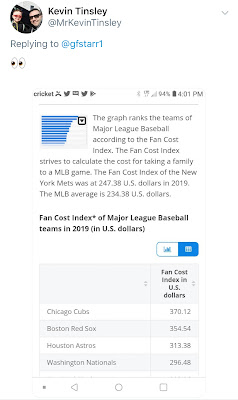 This shows the “fan cost index” this location came up with for baseball games. People were outraged! How can I be expected to take my family of four to a game at those prices? $355?!?!? Baseball is ruining the family experience.


But, this is where it gets interesting. What costs are included in this index? Here you go. 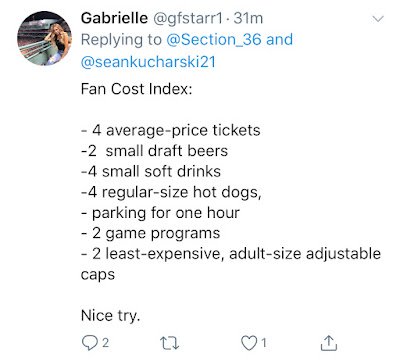 Expensive tickets, beers, food, drinks, parking, programs, and hats. That's the bill that people are complaining about. Other places have standard cost indexes as well. Retail stores, for instance. But nobody complains that Target is too expensive because the cost index shopping cart is too expensive. You don't have to buy a gallon of milk and a bottle of spray cleaner every time you enter the store. You can go in and just buy a pack of baseball cards if you wish. But, I actually had people arguing with me that you can't expect people to go to multiple games at those prices. If you're buying a new hat every time you go to that game, that's really your issue. The Red Sox can't help you there.


Which is also the larger point. If you're including shopping and food, every outing is expensive. If you add the cost of the outfit you're wearing and the food you eat beforehand, even walking the dog is expensive. And more important than that, there's nothing the Red Sox can do to help you.


Even if they gave you free tickets, if you're still eating dinner, and drinking, and buying clothes, and buying magazines, and parking in expensive lots...you're spending a fortune on things that aren't theirs to control. You're still in for an expensive night.


So maybe, just maybe, the Sox aren't out to price gouge you. Maybe the Sox aren't pricing out their fans. Maybe fans are just making too much out of a day at a game.


And there's really nothing the Sox can do to help that.
Posted by Section 36 at 3:33 PM
Email ThisBlogThis!Share to TwitterShare to FacebookShare to Pinterest