Was Derek Lowe Any Good?

I thought it was about time to flip through the scorebooks once again and see how a Red Sox favorite performed while I was keeping score. Today I chose Derek Lowe.

Lowe was, of course, part of one of the most lopsided trades in Red Sox history when he joined the team along with Jason Varitek. He started out as many young pitchers do with a mixed role in the bullpen. From there, he set himself up to be an all-star closer before finishing his Red Sox career as an all-star starter. With all those roles, his scorecards had a lot of variety in them, which you can see in his career totals.

So, was he an all star when I was watching? As a reliever? As a starter? See for yourself. 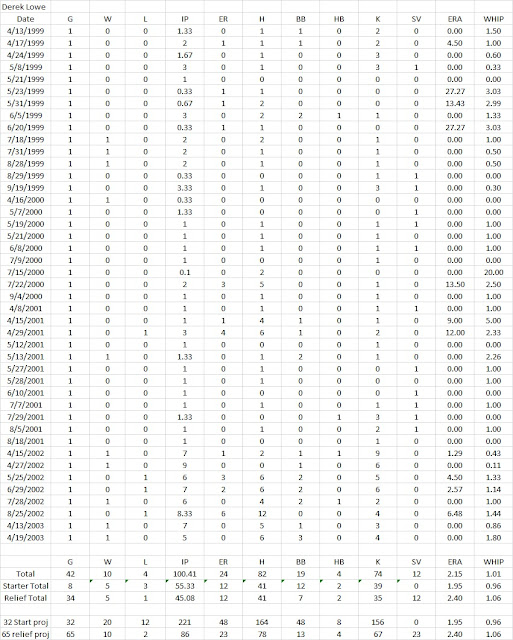 Wow. Wow. And then wow some more. He was really just great at everything, apparently. As far as pitchers I've scored so far...those are approaching Pedro numbers!

His career stats as a reliever are hurt, as far as saves are concerned, because a lot of his games are before his time as a close. And, his starter stats are skewed a bit because one of his eight starts was a no-hitter. But, I don't want to take anything away from those performances.

He projects to be a 20-game winner when I saw him as a starting pitcher. I guessing his ERA would lead any league where Pedro wasn't pitching. As a closer he's, again, a bit short on the saves projection. But, I'll take that ERA and WHIP any day of the week. Well done, Mister Lowe. Well done.

How did he do when you were watching?
Posted by Section 36 at 3:56 PM
Email ThisBlogThis!Share to TwitterShare to FacebookShare to Pinterest
Labels: Derek Lowe, Live Stats